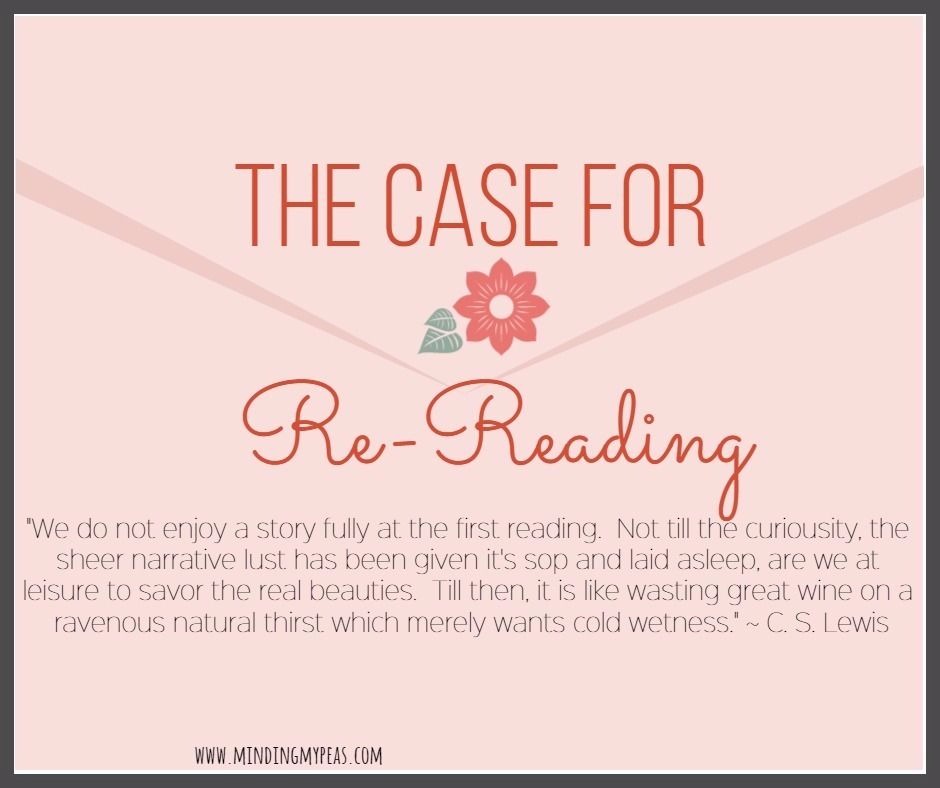 The Case for Re-Reading

In which I make the case for re-reading…

Are you a re-reader? Some people are, and some people wonder how on earth there can be time to re-read the same books. I have personally been in both camps. There are some books that I want to re-read but just don’t find the time for. The classics I read in high-school, for example. I am certain that I would enjoy them more and gain more from them if I read them again now. However, when I sit down and think about what I’m going to read next, the list of classics that I still wish to read could pave a path to the moon.

Then there are books that I can’t lay aside forever, because it would be like abandoning an old friend. Harry Potter, Hermione, and Ron. Anne and Gilbert and Diana. Meg, Jo, Beth, and Amy. Peter, Susan, Edmund, and Lucy. Shasta and Aravis.
You see, I don’t think books remain stagnant. As we grow and change, the books grow with us, reaching different parts of our understanding with each re-reading, and touching our hearts in different ways. Simply, you notice different characters as an adult, and empathize more deeply with them. In a way, they become more and more real.

If you know me, you probably know this about me, but I am a huge Harry Potter nerd. As in, I have re-read the series at least once every year since I first started to read them sometime in my mid-teens. I truly get more out of them every time I re-read them. Different scenes make me teary, different remarks strike me, and the character building never fails to impress. But one of the best surprises of re-reading is discovering the amazing qualities of a character that previously seemed to be little more than background noise. I will never forget the first time I re-read Harry Potter after I became a mother, and every time since. Mrs. Weasley moved to the frontline of the story for me. Everything she does, from taking care of her family and taking Harry under her wing, to the ultimate moment when she steps into battle wielding the fury only a mother defending can have… every scene just clicks now. I recognize that! I know how she feels.

Anne has been another of my long-time friends. I’ve reread the series (some books more than others) countless times, delighting in different things each time. I grew up with her. I’ve read the books as a teenager, as a newlywed, and as a mother. Most recently, I re-read “Anne’s House of Dreams”. In it, she gives birth to a baby who dies after her first hour of life. I have read that chapter 20 times, but it wasn’t until re-reading it this last time, in the wake of my own miscarriage, that I felt the depth of that chapter and the poignancy of the rest of the book as Anne adjusts to an altered future from the one she imagined. Each grief-riddled sentiment settled right into my own thoughts; before, they had been passing fancies that I experienced in the space of an afternoon and quickly forgot. I never understood how deeply that experience changed Anne through the rest of the book. Now I do. I recognize that. I know how she feels.

I’m not saying that every book should be re-read, but I’m making the case for the stories that have lingered with you through the years. Read them again. Let the characters speak to you in new ways. The main joy of reading is getting to know these other lives, true or imagined. If you get to know them for the space of a book, and love them, give them a chance to return as old friends.

So… do you reread? Who are your fictional besties that you meet up with once a year or so just for coffee and a chat?

We do not enjoy a story fully at the first reading. Not till the curiosity, the sheer narrative lust, has been given its sop and laid asleep, are we at leisure to savour the real beauties. Till then, it is like wasting great wine on a ravenous natural thirst which merely wants cold wetness.”
― C.S. Lewis, On Stories: And Other Essays on Literature