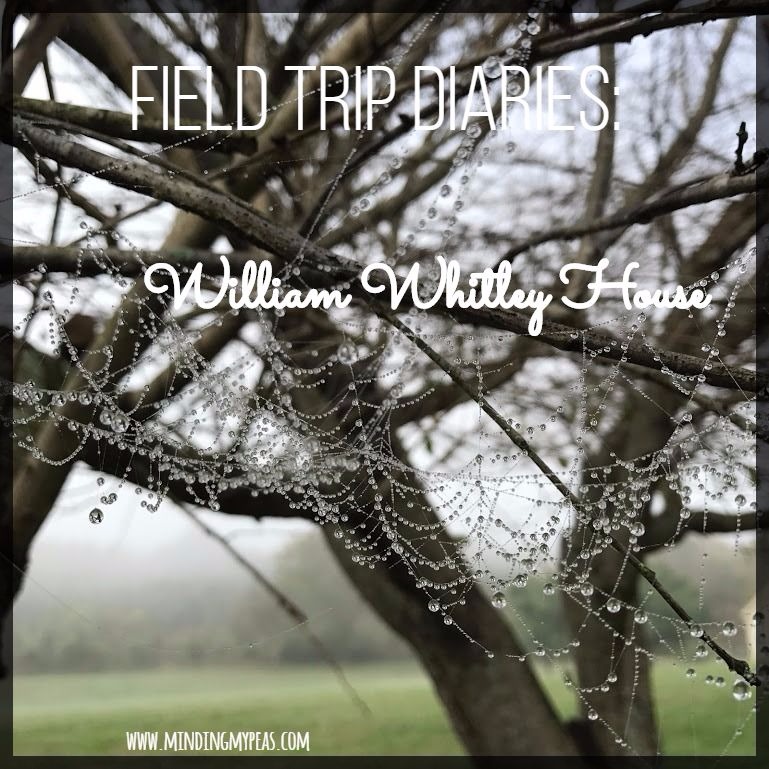 Our visit to the William Whitley house was the second official field trip in our second term this year. You can read about our first field trip–to Camp Nelson–here

The William Whitley House is an impressive brick home, nestled in the rolling hills and valleys of Lincoln County, Kentucky. Built by William Whitley between 1787 and 1794, it was the first brick house built in Kentucky. During the time of its construction, there was still frequent fighting with the Indians and Whitley built this house to be a fortress for his family and guests.

It was built 2 feet thick, in the Flemish bond style, with white bricks added to make a very unique pattern on the ends of the house. The windows are all raised significantly, so that nobody would be able to shoot directly through them. For similar reasons, though there is a front porch now, when Whitley built the house he chose not to add porch or steps. Family and guests entered the house by way of a rope ladder cast through the front door.

Although the house is clearly unique as a stronghold, the inside was carefully crafted to be comfortable and stylish. The decorative wood trim throughout the house is both symbolic of his Irish heritage and shows patriotism towards his new country.

William Whitley and his wife, Esther, came west to Kentucky from Virginia. In 1788 he put in a circular race track and declared that his races would be run counter-clockwise, rather than in the British tradition. The great racing tradition began in William’s front yard, where he would invite friends from miles around to gather for races in the morning and an extravagant breakfast on the front lawn after. He gained fame as a frontiersman and for his success in battles with the Indians, served a term on the Kentucky General Assembly, and volunteered in the War of 1812. It was there that he died, in service of his country.


Esther was a wonderwoman of the time. She traveled on horseback through the Allegheny mountains with her two young children tied onto her for safekeeping. When they reached Kentucky, she raised those two children, plus NINE more, and was frequently the sole protector of the household when William was away. During the late 1780s and 1790s while the big house was being built, she lived at various forts in the area and fought alongside the men when the forts came under siege. By all accounts, she was a crack shot and a pillar of early society in Kentucky.

Of course, I have only barely glossed over the known facts here. For more historical context and details, check out the brochure here.

Today, the William Whitley house is open for tours Tuesday through Sunday, April to October. Admission to the house is $5 for adults, $3 for children, and children under 6 are free. I highly recommend touring the house. The docents are very knowledgeable and share so many wonderful facts about the house and the people who lived there. After you’ve finished touring the house, make sure you walk to the small graveyard, and then to Sportsmans Hill.


The opportunities for nature study abound here too. There are many trees to identify, common wildflowers, and various berries. And that’s not even mentioning the wildlife! This place is saturated with wonderful learning experiences–from history, to science, to civics and political science, to household economy. Check it out!

The Case for Re-Reading