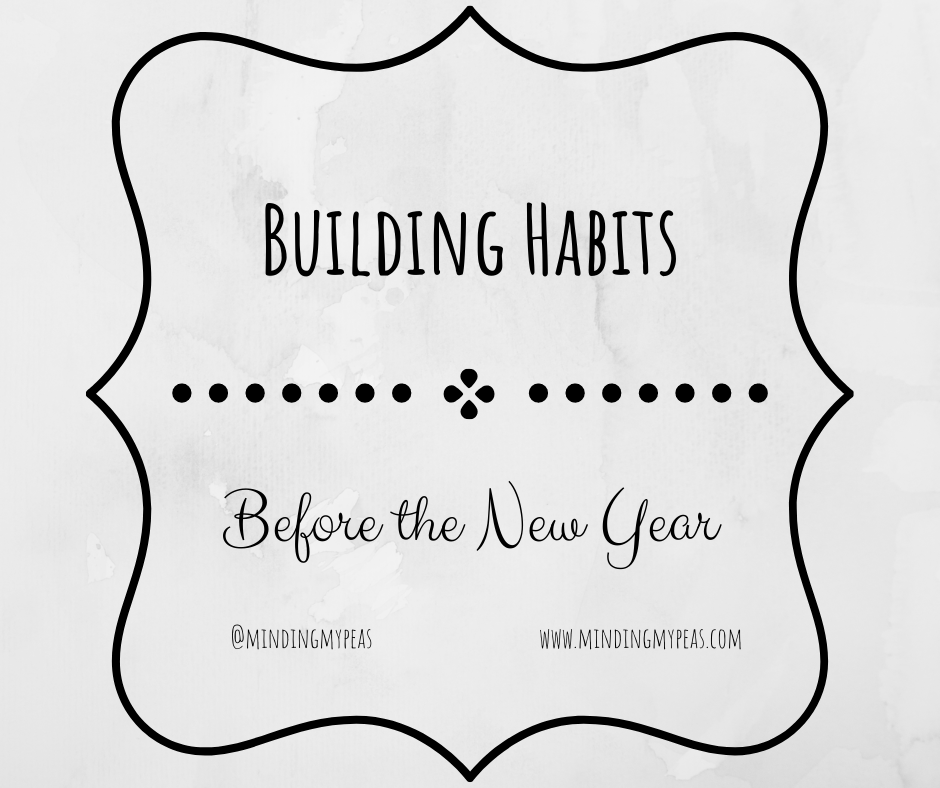 Building Habits Before the New Year

The beginning of a new year always inspires me. There is endless potential wrapped up in every blank calendar page, and as a planner kind of gal, I just love it. I am great at making plans. I’m not always great at following through. Recently though, I’ve made plans (hahaha, right?) to change that.

I’ve heard a lot about Rachel Hollis’ book, ‘Girl, Wash Your Face‘ but I hadn’t read it until my awesome sister said I should and sent it to me. It was the perfect book at the perfect time. Hollis is so inspiring, but in such a down-to-earth, relatable way, that she snaps you right out of whatever pity-party funk you might be in. Her book, in conjunction with Laura Vanderkam’s books on productivity (especially ‘I Know How She Does It‘) have had a big impact on my attitude towards goals lately.

The biggest message from both books was this: Stop making excuses. I found that I had a plethora of excuses why I wasn’t accomplishing things I felt I truly wanted to do. Well, the kids are always interrupting. The naptimes aren’t synchronized. I have to watch them constantly. The house needs to be clean. No, cleaner. No, really, cleaner.

Nobody is free from excuses. Humans excel at attempting to justify themselves with alllll the reasons. It is humbling, unpleasant work to delve into your own shortcomings. In my case, one big issue was that I wasn’t being focused in how I spent my pockets of free time. It had become habit to assume that I had no free time, or that the free time I had was impossible to use because it came in such sporadic, brief segments. Neither assumption was true. I was just squandering it on pointless things.

For example, I would put Sieg down for his nap and spend the first 30 minutes of it picking up toys and tidying up. Admittedly, that’s something that has to be done. But it’s NOT something that has to be done in one of my pockets of time. By the time I had my cup of coffee and was sitting down ready to work, 45 minutes would have gone by. Some days he naps longer than others, but about half of the days, he’s up in an hour.

Naturally, I felt like he was getting up as soon as I started working. I wasn’t exactly wrong, but I was using my time poorly. Fifteen minutes might not be an amount of time that I can do much with (although it is something) but an hour is definitely something I can use.

The truth is that I have time. The problem is how I’ve been using it. Naturally, when I loved Rachel Hollis’ book I started following her on Instagram, and happened upon her ‘Last Ninety Days’ challenge right before it started. The idea is that you spend the last ninety days starting your good habits, so that you don’t start the new year and peter out within a couple of weeks. She suggested 5 habits, but a few of them were things I’m already doing or don’t really struggle with, so I switched it up.

I’ve already missed a bunch of things over our week of vacation, but the point is forming good habits that last and not falling off the rails entirely because something changed.

Tracking progress is important when starting out with forming habits. It’s a pretty straightforward mirror and it doesn’t avoid excuses. You either did something, or you didn’t, and it’s as simple as that.

The best tracker I’ve found is a free app called Strides. You can add your own goals, set up reminders, and see your progress over time. Also, it shoots off confetti when you check off a habit, so that’s encouraging, haha. I think there is some way to upgrade the app and do different things, but the free version is working great for me.

More than just clicking a button on an app though, I think it’s important to talk about our goals. We need to talk about why they’re important to us and how we’re going to accomplish them, because as long as they only exist in our minds, it’s a lot easier to find excuses and ignore them. It doesn’t have to be some big internet thing–talk to your husband or a friend with similar goal-setting mentality. Write them down. Pin them up above the sink where you do dishes, or on the bathroom mirror.

Lastly, spend a couple of weeks doing a time log. It doesn’t actually take as long as you’d expect it to. Make a grid or use an excel sheet with 15 minute increments and write down what exactly you do with your time. All of it. It’s just for you, but it will be enlightening. I promise.

Set them out somewhere where you can’t ignore them any more and search out things that encourage you to pursue them. Most importantly, start now. Don’t wait for Monday, or a new month, or a new year. Just start making changes now, a little at a time.

5 Quick Ways to Reset For Moms