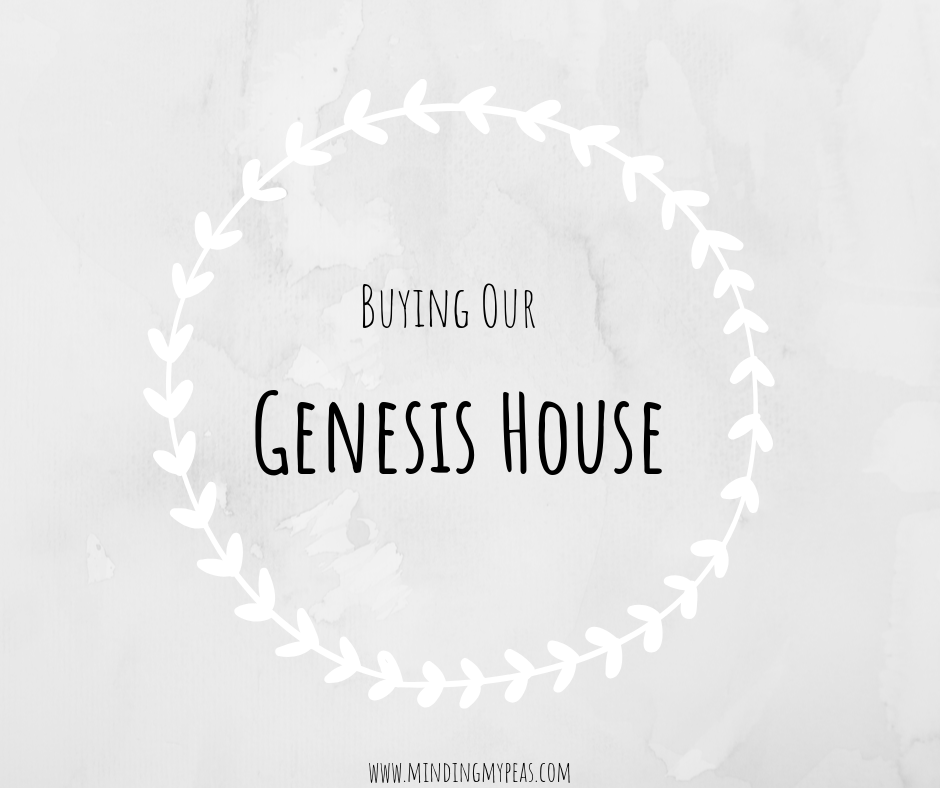 Four years ago, on a cool, rainy October day, Josh and I walked into a lawyer’s office to buy a house and walked out fifteen minutes later home owners. Buying a home is a pretty typical American thing to do. You get married, have a few kids, and somewhere in there, decide it’s time to buy a house so you can stop throwing away money on rent every month. The only thing that made our particular home buying experience at all unique was the fact that we paid cash. It was a tiny, 3 bed-1 bath home, in great condition, on a little plot of ground in downtown, and it was ours for $86k.

We named it, partly because we’ve watched a lot of Masterpiece Classics Drama, partly because it just seemed like an appropriate thing to do with one of the biggest purchases of a lifetime. We call it our Genesis home, because it was the beginning. *cue the dramatic music*

It was the beginning of the fruition of something we had been working and saving towards for almost 4 years. We didn’t fall into an inheritance, or win the lottery. We just saved our money. It was as simple and as hard as that. A lot of people think it sounds unattainable–how on earth can you save that much in a reasonable time frame?

Saving for the house

Truthfully, I think there are probably lots of people who could do it faster than we did. We started actively saving with the goal of buying a house in cash, in April of 2012 with $21k already in the bank from previous years of saving. From that point, we saved an additional $100k in a little less than 4 years. During that time, we had 2 children, and moved 3 times. We only ever had one income–Josh was in the Navy (E5 for the first couple years, and E6 the last year before discharge) and I was a stay-at-home mom–that is to say, childcare provider, housekeeper, cook, etc. Ha! We lived in rentals the whole time, had two vehicles most of the time, and felt like our lives were pretty normal.

We’re minimalists, but not in the chic Scandinavian style minimalism everybody loves today. We were minimalist because we had a very clear vision of what we actually wanted–a house of our very own, with no mortgage to worry about–and all the peripheral things were just not important.

Your situation won’t look exactly like ours, but I do believe anybody can save up enough to buy a house. Whether you go all in and save a chunk of change to make the entire purchase in cash, or save enough for the down payment and choose to live in the house while you pay it off as quickly as you can, if you’re really committed, it will take a lot less time than you think it will.

We bought our first home in cash in October of 2015. In April 2018, we had an unexpected job-related move. We were able to hire a property manager and get renters into our first home within two months of the move. In April 2019, we made the decision to buy our second home with a mortgage and we’re now using our rental income as well as more serious saving to pay this home off in under 5 years. When we pay this home off, we plan to invest in more rental properties until we are able to retire and travel around the globe on our passive income.

I’m writing this out for several reasons. First and foremost, I want to encourage other young families that you CAN own your own home, without spending your life paying off a mortgage and interest. By the time you’ve paid on a $200k loan for 30 years, you’ve paid almost double the original cost of the house! It’s just not worth it, and paying it off sooner is almost always totally doable with some dedicated penny pinching. I want to help you see how you can do it too!

Secondly, I think that as we go through the process of saving and paying off our current house, it will be motivating to be able to share our progress and anything that helps us along the way. We’re at a different stage in life than we were when we were saving for our first home. We have four kids who we home educate, and they are reaching the age where it is important to us to be able to travel with them and experience this beautiful earth together. Paying off a house and making big travel plans are two things that don’t always go hand in hand, but we’re committed, and that’s half the battle.

Thirdly, there are a lot of misconceptions about how expensive it is to raise a family. Sure, they grow out of their clothes every season, and there are doctors visits, and dentists, and Christmas, and the food… But it doesn’t have to be nearly as daunting as some would have us believe.

Ultimately, I’m really just hoping to encourage somebody else as we go. Maybe inspire one more person to make big, scary, exciting, savings plans. Why?

“Tell me, what is it you plan to do with your one wild and precious life?”

The Summer Day by Mary Oliver

So, follow along if you’re into budgeting. Let me know if you have any questions! Maybe skip these posts if you’re more about the books. I’ll still be keeping up my book posts, never fear 😉

A Year With Four

What I Read: September

3 thoughts on “Buying Our Genesis House”