Blitz to a Clean(Ish) House 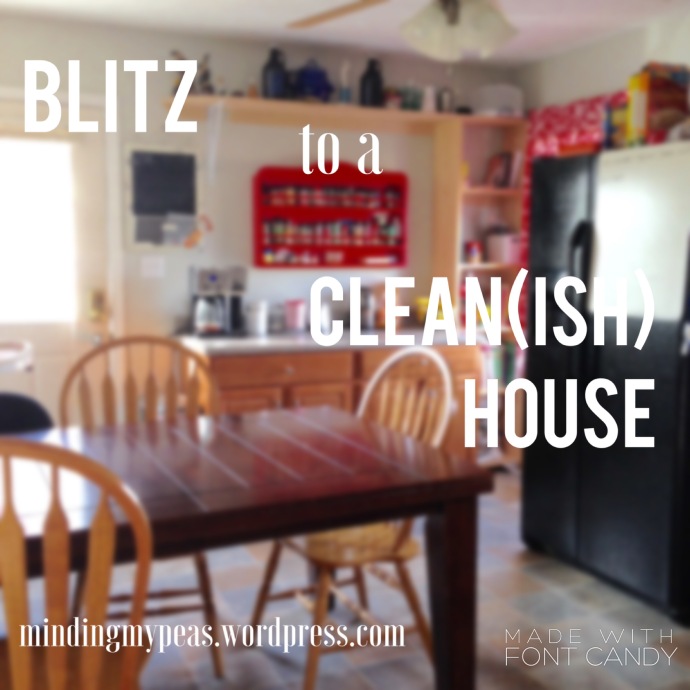 Blitzkrieg or “lightening war” is a term first used by the Germans in 1935 to describe a series of powerful, but brief, attacks meant to thoroughly discombobulate the enemy while surrounding them, and ultimately bring a swift victory.  I’ve come to use this term to describe the way I approach house cleaning.  Of course, the Germans lost the war and I have three little kids.  So, that lends an ugly twist to  the ultimate success of my analogy or my house cleaning–probably both.  But, I’m in this now.  I’ve been calling my little cleaning campaigns blitzes for too long to back out, and frankly, lightening war is a great way to describe the act of cleaning while there are children (or anybody) living in the house.  Much like the fate Germans in the 2nd World War, I believe my cleaning attempts are ultimately doomed, but we keep calm and carry on.  (Okay, I’ll stop with the WWII trivia now. Oy.)

In this post I’m going to share the 5 things I do every single morning in my blitzkrieg for tidy.  We live in a pretty small house right now.  We love it, but we are struggling to keep from busting out the seams.  I admit, some messiness is just a fact of life when you have three little kids in a small space.  There will be toys on the floor!  But it really helps my mindset, and my Superman’s mindset, if the other clutter is kept to a minimum.  Toys are easy to pick up, and I have the kids help me pick up the living areas before meals, naps, and bed.  As long as the rest of the house stays in a state of equilibrium it’s fairly easy to keep buying into the possibility of ultimate victory and world domination.

My only caveat is the kids bedroom.  I clean it several times a week, but they make such a mess in there on a daily basis that I don’t want to do the same morning/afternoon cleanup that I give our main living areas. I don’t want them to believe in the Magical Coffee Table (or bedroom floor, if we’re being specific), so I always have them help, but that is it’s own series of struggles.  (If you haven’t seen this video by Troy Kinne yet, you probably should.  Just saying. Do you have a Mysterious Table?)

Anyways, I start out my mornings with 30-45 minutes of blitzkrieg to get these 5 things done.

Just those few things really make a difference for me, both in my attitude about keeping a clean(ish) house and in the ease with which I can do quick (no more than 15 minute) pickups at other strategic times during the day.  Cleaning is one of those things that is definitely a mental battle for me.  I feel frazzled really easily in a messy environment.  But I also hate feeling like I spend my life doing cleaning chores over and over that are never noticed or appreciated–heck, I know some people would never consider my house to be clean.  There are a lot of things that I am more interested in than cleaning house.  So, I do my best to keep the cleaning efficient and minimal.  Messy with little kids is a season, just like breastfeeding, or sleepless nights, or the ornery threes, but it doesn’t have to be TORNADO!!! season all the time 🙂   Just blitzkrieg it, try not to think about the ultimate pending failure, and you should be golden!

What about you?  Are you a blitzkrieg type of cleaner or do you have a magic coffee table?  Let me know in the comments!

Healthy Groceries on a Budget #10